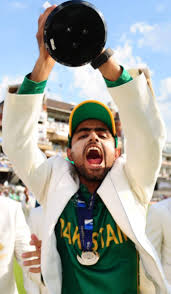 There is no doubt Babar Azam is one of the best cricketer in current international cricket. He is a classic player. When he joins the team Pakistan cricket were really in  troubling for 3rd spot in ODIs after retirement of the great Younis Khan. When he completed his 5th odi ton in 25 matches he became 2nd quickest after Quinton De kock . He made 3 consecutive centuries against windies  make his name in international cricket. He further continues his in t20 also and having more 50 average and best strike rate. His fans makes his comparison to virat kholi but he has long way to carry his form. While struggling in red ball cricket team management give him full support to develop his skill. Because test cricket art is not an easy as look like. But he has talent and he show his class in test cricket as pakistan visit south africa .

Before tour of south africa  his test average was very low and most of cricket analyst were not considering him a test cricketer . he score 221 runs in 3 tests including 2 fifties and most important he punish Dale Styen 3 time for hatrick of boundries . which Appreciate by cricket experts and the doubt that he is not a test specialist cricketer . meanwhile his test average is just over 35 but he is improving it day by day . he has scored 1235 in test criket with 1 ton and 11 fifties .

He started his international career with odi against zimbabwe at Gaddafi stadium and till now he has played 59 ODIs with average of 51.29 and hit 8 tons and 10 fifties and scored 2462 with strike rate of almost 85  across this format currently rank 5 icc odi rankings.

One thought on “Babar Azam master of his own”