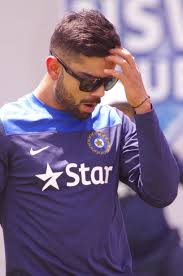 Pressure a massive factor in the second half of WC says Virat Kholi where all captains expresses their views before WC 2019. In world cup pre- departure conference Virat Kholi spoke about intensity of pressure and how each side will handle in next days. Virat Kholi already express this world cup the challenging in the history of ICC. as modern cricket is change by T20 Era.

He also talk about recent series against Australia where India starts with 2-0 but in the end Australia bounce back and send India to back foot through 3 consecutive defeats that series helps us to work on our weaknesses and recover things. He describes that if a team got a day to compete an experienced side and they on their natural game rather than winning in the end result could be in their favor you should keep your passion and commitment.

For World cup 2019 India and England are entering as favorites but the challenge is not easy as Australia, New Zealand and South Africa are also well in the race. And don’t ever underestimate Pakistan as they shocked world of cricket in Champions trophy 2017 when rank-8 team outclass all teams and grab the title.

First 4 or 5 games are very important for each team every team have to play 9 games. We are not considering any team weak all teams are strong that why they are in the competition. We need to focus on our skills and prepare for each game he said.
India-Pak game is always interesting one the whole world eyes on this match. But in the field we both are very professional and that not like that as fans take it. And we both sides just apply our skills to overcome it. We take it as another game but the pressure is hard on both of us as atmosphere is different.

Condition of England have to be adopt scoring high is now trend here. But he thinks 250 will be also an average score and could be depended and 280 will be a difficult one to chase and 380 will be difficult in later stage. The bowling will be major part for each team to control flow of runs. I thinks Pressure playing a massive factor in the second half of WC.

Kholi form is on focus he is backbone of Indian cricket team and call run machine for India. Jofra Archer already explains that he will be looking for Kholi’s wicket as will Rashid Khan thinks.
He said that in the field you are not looking that who gets you out. Myself I look the way I out and further I starts work on my mistakes. No doubt Jofra Archer is a world class bowler and his inclusion in WC squad will strengthen English side. And Rashid Khan’s variations can give tough time to any batsman in this event.

Babar Azam is scoring faster than his idol Virat Kholi