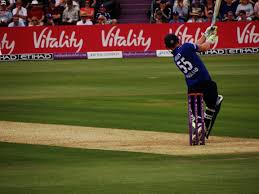 All round Stokes axed South Africa in world cup opener. England beat South Africa by 104 runs. After winning the toss South Africa put England into the bat in a little grossy pitch and get succeed after getting most important wicket of Barstow in very second ball of first over of Tahir. Then Roy and root took control and put 106 runs partnership with run a ball brings England in driving seat both departs after scoring fifties. Skipper also registered fifty to strengthen scoreboard. Butler and moeen departs as both couldn’t put any impact on scoreboard. That was Ben Stokes who carry his innings till 49th over and make sure 300 plus for England he scored 89 of just 79 deliveries. And set 312 target for South Africa.
In a reply South Africa were not looking compatible amla was retired hurt on 5 runs. They loose their first wicket 36 and soon on 44 the Skipper departure put Africa in really trouble. De cock who was looking in good touch put 85 runs crucial partnership along with van Der Dussen. But as soon he was caught by root in bowling of Plunket on 68 on total score of 129 then south Africa couldn’t recover it. Whole team were bowled out on 207 in 40th over. England won their opener match with massive 104 runs margin.
Jofre Archer who was very impressive through whole innings took 3 wickets for 27 runs in 7 overs. While Stokes and Plunket shares 2 wickets in an easy opener match.
Things are now about very concerns for Africa to plan their game as they have 8 more matches to play in world cup.
With Allrond performance Ben Stokes awarded man of the match and England starts their world cup campaign with style.