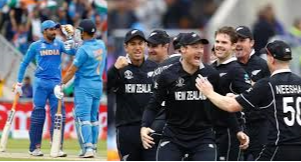 Jadeja heroics in vains as india bows out of world cup. New Zealand batting first Guptil’s failure continues as he edge to first slip with the ball of Bumrah in 4th over at score of 1 on the board. New Zealand suddenly came under pressure. Captain Williamson came to rescue his team and joins Henry Nicholls to build target for India. they put 68 partnership together. Nicholls undone by Jadeja with a brilliant delivery and clean bowled at 69 runs on the board. Nicholls made 28 of 51 balls. in 19th over. Senior partner Ross Taylor joins the skipper. New Zealand with losing wicket run rate were also another problem for them.

Both Williamson and Taylor starts building partnership but the RR was still a problem for them. After completing his fifty Williamson just start to accelerate the scoreboard. Before he dominate on indian bowlers caught by Jadeja at point in ball of Chahal on 67 of 95 balls. partnership between Taylor and Williamson of 65 ends as New Zealand loss their 3rd wicket at score of 134 in 36th over. India were hold control in the whole innings. After first delivery of 47th over rain force to stop the game and then in the whole day rain does not allow umpires to starts again where the game was paused and things approaches to Reserve day.  Ross Taylor made 74 of 90  gets run out by Jadeja with the brilliant Direct throw in 48th over. what a man Jadeja is in the field either with the ball or his fielding. New Zealand manages to 238/8 in their 50 overs on reserve day. India were looking favorite for chase.

India starts with collapse in form man Rohit edge to Latham in 2nd over with exceptional Delivery of Henry at score 4 runs on the board indian top order sinks as kholi sent by Boult with a magic slow delivery in 3rd over . KL Rahul also lose their wicket to Henry in 4th over Idia got himself in deep trouble as they lose their 3rd wicket on 5/3. First time in WC, history f Top three batsmen out on 1,1,1. Kholi once again fails in WC, semi finals. that run chase turn into a nightmare for india. New Zealand exceptional bowling performace put down India. they lose their 4th wicket on 24 when Neesham takes a stunning catch of Kartik on bowling of Henry.

Pant and Pandya starts resist to bring things on the track. Pant throw away his wicket to Santner with an irresponsible shot on score of 71/5 he made 32 of 56 puts India in more trouble. at score of 92 in 31st over India lose Pandya who caught by Williamson and it was again Santner who provided another vital break through. India were never look compatible in this low scoring chase that was the pressure of Semi Final.

Jadeja and Dhoni’s partnership starts hurting New Zealand. And brings India into the match as usual Dhoni stay cool and calm and Jadeja plays attacking cricket converts pressure into New Zealand. Jadeja completes his half century on just 38 balls and continues his Agressive cricket. Required RR was another issue for India Jadeja has to go for big hittings and he lose his wicket on 208 in 48th overs he made sensational 77 on only 59 balls was turning point of the match as New Zealand gets much needed wicket. together Jadeja and Dhoni put 116 partnership for 7th wicket and keep thier Dream live. soon Dhoni lose his wicket as well Guptil was the man who send Dhoni to the pavilion with the Direct hit and New Zealand ensures his spot in the Finals just they have to wait till next nine Deliveries because then India were needed 24 runs in last 9 balls and their tails were on the strike on both end. India were bowled out on 221 in the 50th over.

The most favorite contender for WC,2019 fails in a low scoring run chase. credit to New Zealand bowlers who out classes indian top order with his excellent performance and their skipper his skills he knows how to keep the opposition in his limit.

Matt Henry was awarded man of the match with his brilliant spell of  37/3 in his 10 overs quota.

New Zealand won the Semi Final by 18 runs and make 2nd Consecutive spot in the Finals.